Hi guys, I am trying to do radiometric calibration using the sunshine sensor data only (using Irradiance List tag).
I am sure that this tag has BASE64 encoded data. Once you decode the string you get an array of structures where each structure corresponds to a reading of Sunshine sensor. Each structure contains the following elements:

However, the question of impact of Gain and Integration Time on CH0 count and CH1 count still remain unanswered. Please indicate what would be the impact on CH0 count if gain and integration time are changed.

The Sunshine sensor behaves like a linear irradiance sensor with no black level.
Mathematically:

Please note what appears in the IrradianceList tag list is a gain index and not the gain itself, which is a function of gain_index and an arbitrary reference_gain.

The precise gain varies from unit to unit. And can be estimated using the IrradianceCalibrationMeasurement tag.
This tag contains a table of band name, gain index, exposure time in milliseconds, CH0 count, CH1 count in that order for different gain indices. These were all measured under identical lighting conditions. If you choose a reference gain, for instance the one with gain index 1, then you can take the ratios of the counts at different gain indices to obtain the effective gain for that Sunshine sensor.

Thanks for your help!

The data would need to be interpreted in row-major order to match my comment above instead of column-major as you have. But here’s an example with your particular tag.

Note gain(3, 1) is unknown, as the data is saturated for a 10-bit sensor represented on 16-bit values (count at (2**10-1)*2**6 ). Also note the choice of reference_gain is arbitrary as long as you keep the same reference everywhere.

The same computations would need to be performed for every band (Green, Red, Red edge, NIR) and channel (here I omitted CH1 counts for simplicity)

Thanks!
Since the gain index in the IrradianceList tag is always 1 (as far as I can tell) and the integration time is always 100, then the irradiance is proportional to the count (ch0)?

@domenzain, thanks a lot. Your information is really helpful.

I have a few more questions.

I once again want to thank you for the prompt and detailed support.

@muzammil360,
I’m not sure I understand the second question.

Is this what you meant?

Would you also be able to explain what is the CalibrationMeasurement tag about?
Thanks!

Correct me if I am wrong, but, there is actually 4 Ambient Light Sensors, each with it’s on filter over it. Here’s an image someone posted of it opened up… 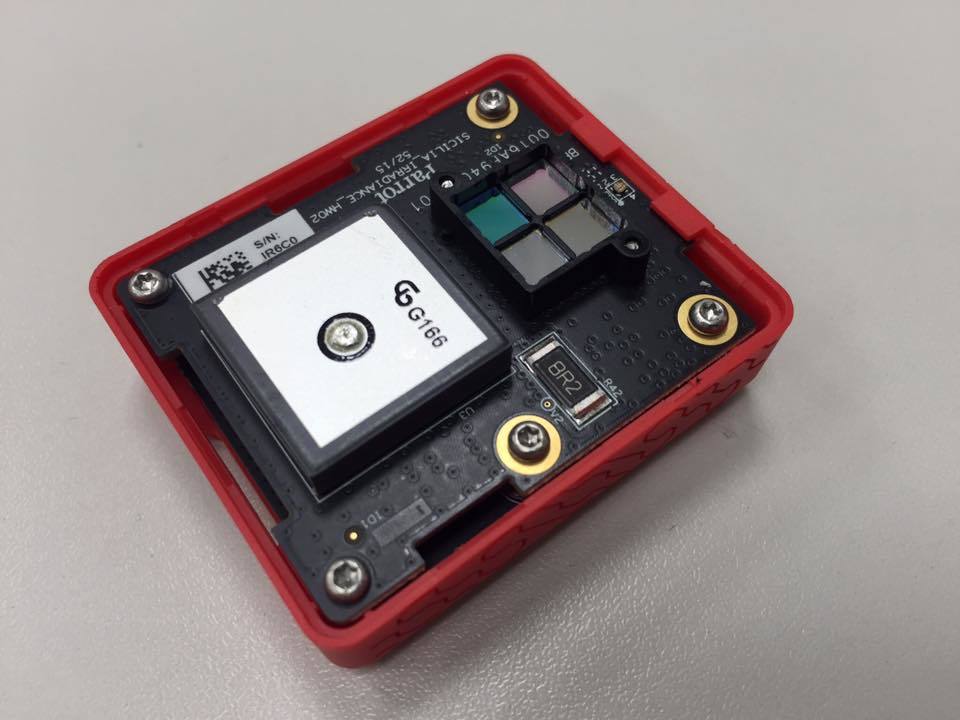 @js_yellow, there are developer documents coming up regarding the other radiometric metadata. You can safely ignore the CalibrationMeasurement tag. Despite its suggestive name it holds no useful data.

@domenzain, its great news that Parrot is finally releasing some documents.

@domenzain, lets say I get correct CH0 and CH1 counts and I also make up for the gain and integration time factor. Now what information does this count convey to me?

Overall I am a bit confused about how the sunshine sensor count works with radiometric calibration process. It would be great if you can refer some paper or other informative material.

@seanmcleod, I don’t think it’ll be that simple. From tests I’ve done, there’s no simple linear relationship between ch0 values (even if corrected for gain and int_time) and the pixel values in photos taken under different light conditions. So ratios won’t work.
Also, there is no simple linear relationship between your image exposure (ISO or shutter speed) and it’s pixel value either (Shutter speed and ISO correction)… So, we need Parrot to give more info in order to be able to apply any corrections… hopefully, they will.

@seanmcleod, Js_yellow is correct. There doesn’t seem to be a simple linear relationship even for exposure correction. Multiplying by the ratio of EV values doesn’t work.

Have a look at Laboratory Measurement of Bidirectional Reflectance of Radiometric Tarps, it will clear things up. There are many other reference materials for this.

This would work if both sensors had identical solid angles and sensitivities for perfectly Lambertian surfaces at nadir.

As I mentioned above, there are some documents on the way. I am unable to provide an exact release date at present.

About Radiometric calibration
next page →