As the robot closes in on its target, it increases its speed and jumps through the air landing just short of his foot. A successfully launched Roboscope attack!

To start attacking today, download Neurala’s Roboscope app, powered with artificial-intelligence features and developed by the same firm that’s now working with NASA and the U.S. Air Force on other “smart learning” software.

Roboscope players may not be able to explore the surface of Mars or view Earth-bound targets from high in the sky. But players using Roboscope will get a unique preview of the future of Neurala’s robotic technologies that are being brought to earth for consumers.

Using Neurala’s algorithm-driven software, Roboscope allows MiniDrone players, using pinch box features on their iPhones and iPads, to zero in on specific objects –or even people. Roboscope actually learns in real time where an object is located and moving — and then watches it in “recon” mode. 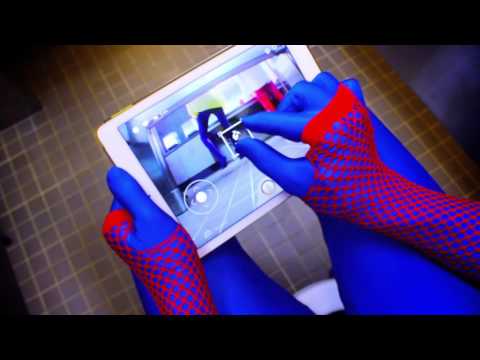 After tapping commands to launch a “sneak attack” or “fast attack,” players can simply let go of their on-screen joy sticks and swipe controls – and let Roboscope take over to finish the robotic battle plan with a flourish of jumps, flips or spin actions.

Roboscope is Neurala’s first-generation foray into consumer products — and it promises not to be its last.

In addition to its artificial-intelligence tracking feature, Roboscope users operate Jumping Sumo and other Parrot Jumping MiniDrones from a live onboard camera view via their iPhone or iPad. An onscreen interface allows users to control movement, speed, and direction. Roboscope also has pre-programmed sound effects and screen-filter features that allow players to view video feeds in black-and-white, blurry, psychedelic or other filtered effects.

Naturally, players can command their MiniDrones to jump, spin, flip, whirl and smack into anything they want at the push of a button.

But the main feature of Roboscope is its embedded artificial-intelligence tracking algorithm. That’s what transforms the Parrot MiniDrone experience.

Roboscope’s artificial intelligence feature is merely an early-stage peek at Neurala’s “deep learning algorithms” that it intends one day to embed in a wide variety of robotic technologies for NASA, the US Air Force and other customers. The goal: To make robots learn like humans – and now you can download some of that knowledge in Roboscope today.

‎Turn your Jumping MiniDrone into a super attack robot with Neurala's Roboscope! Roboscope provides two new tactical modes. First, use Recon Mode to go undercover and watch your target from afar by keeping your subject in view. Then, go into Attack...

OMG. 1 year past from anounce, but there’s no Neurala Roboscope app in Google Play Market.